Kawaii, literally “cute”, is the Japanese term that refers to the icons, manga, dolls and anime of Japanese culture that have given rise to a specific youth culture that has also become well established in the west. This performance project was inspired by Japanese culture and the neo-pop aesthetics of contemporary artists such as Takashi  Murakami: together with “i” (2008) and “Coso” (2010), it is part of Schuko’s wider research on the issue of identity and the transformation of the body through stage costumes. Here form gives rise to different sensory capabilities, presenting 2 characters hiding their own contradictions behind their kawaii appearance. Costumes are used here to transform the body, in a choreography where what is worn determines the way the characters move. Music by Nobukazu Takemura is performed by virtual singer Hatzune Miku, the iconic Japanese manga character. 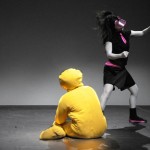 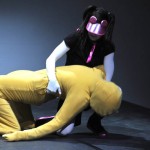 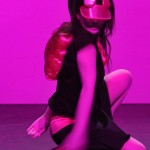