Superonda’s project is divided into several chapters that deal with the theme of human adaptation to environmental emergencies and for which the company uses different artistic languages. The project takes inspiration from the unexpected and unsettling events, such as floods, earthquakes, tsunamis and climate change, which increasingly are affecting the contemporary reality. These events are a reminder to focus not only on universal themes as life and death, but above all on the ability of humans to adapt to extreme situations. Natural phenomena are understood as unforeseen forces able to operate violent shuffles of objects, ecosystems and people. Superonda illustrates the physical condition, relational and existential determined by that fact, talks about the possible reconstruction and possible new form of things.

The company has conducted a workshop with a group of students of Design, aimed at the realization of short performances of which they were the creators and performers. The usual activities of Design students have a combined path of bodily practice that gave rise to the stage action. Physically and visually they work on themes such as: adaptation, diversity, changes in space, solidarity and struggle for survival.
Designing scenes provided the inspiration for the dynamics and forms of movement, as well as the body work has been fundamental in directing them in the creation of the sets. The work was presented in a site-specific version at the Phd Design Festival within the spaces of the Polytechnic of Milan. 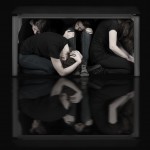 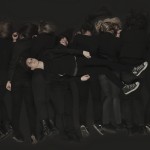 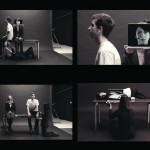 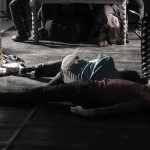